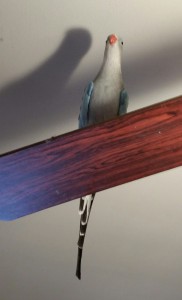 Kris was a bird on a merry go round. I let Kris out of his cage for a little exercise and recreation. This parrot firmly believes in recreation. Kris flew up onto the ceiling fan and proceeded to use it as a merry go round. (Yes, the fan was off otherwise he may have been hurt by the moving blades.) The only movement of the blades was caused by Kris walking on them.

As he slowly walked the length of the blades, his shifting weight caused the fan blades to rotate. I believe the changing balance was what caused movement. Then he would jump from one blade to another, sometimes causing the rotational direction to change. The next new carnival ride will be Merry go rounds for parrots.

Too bad he didn’t dust while he was up there.